I made sure that I arrived to Wien in time to do some research before the presentation, to know which examples would be relevant, take some ride photos, and, of course, collect ride data from the PraterTurm, as complement to the data in the recent paper about Rotating Swings – a Theme with variations.

The walk towards the PraterTurm passes many other rides, starting with the classic Riesenrad, and a few entangled roller coasters. The photo below shows clearly the saw-toothed track part of the “anti-rollback” device, which causes the familiar click-click sound as the roller coaster train ascends the lift hill.

Approaching the PraterTurm, I also discovered the Boomerang (Vekoma), the non-suspended version of the HangOver (Invertigo) , which stood at Liseberg 1996-2002. In these coasters the train travels twice through the ride. After reaching nearly to the initial height on the other side, the train is pulled up the missing bit and then travels back again, giving a beatiful illustration of the small energy losses in a roller coaster. Like the Boomerang, Hangover also features a loop, which clearly shows the larger radius at the bottom, to reduce the forces on the rider. This can be achieved mathematically in different ways, as discussed in my paper on Roller Coaster Loop Shapes. The HangOver loop is constructed to give an essentially constant centripetal acceleration around 3g.

It was very windy at the top of the PraterTurm, which is a StarFlyer from FunTime. I had
brought the black-box WDSS from Vernier along. The result is shown in graph to the right. The WDSS measures “acceleration” (or rather “g-force”, corresponding to the force/kg from the ride, here expressed in terms of “g”) as well as pressure, expressed in terms of elevation. During part of the motion around the tower, the wind forced the swings closer to the tower, introducing a slight wave motion also in this StarFlyer, as seen in the data to the right. The elevation reading reflects the varying pressure as the wind hits in different directions, giving, in fact, also values for the period at the top. Figure 7 in the paper about Rotating Swings shows the relation between force on the rider and period for Himmelskibet in Copenhagen, which has the same dimensions as the PraterTurm.

Next to the PraterTurm is the classical pony-carousel, with carts pulled by real live ponies, moving clock-wise, as opposed e.g. to the pony carousel at Liseberg, which was the location used for the movie showing one of the possible experiments for small carousels. (The experiment is described in more detail in “How do we know the Earth spins around its axis“) 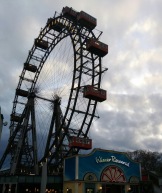 On the way out, I discovered the small wave-swinger Luftikus, packed together for the winter.

Looking at the Prater signature Riesenrad and the thin wires holding it, I wished for a colour-coded augmented reality picture, showing tension and compression loads – even statics can be fascinating!

A magic in itself was to be at Universität Wien, one of the homes of Quantum Magicians.